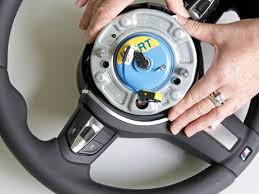 Takata Corp. has been ordered to replace as many as 40 million additional air bags linked to deadly malfunctions, more than doubling what was already the biggest auto recall in U.S. history and putting more pressure on the troubled parts maker whose stock has plunged.
The National Highway Traffic Safety Administration announced the recall Wednesday after a week of leaks and weeks of discussions with the company. The action will include all air-bag inflators that don’t have a desiccant to reduce moisture, a factor thought to contribute to misfires that spray bits of metal into the passenger compartment.
“This issue is urgent,” said Mark Rosekind, NHTSA administrator. “The science clearly shows these inflators can become more dangerous over time.”

The move is in addition to the 28.8 million inflators Takata had previously recalled in the U.S., affecting vehicles made by 12 different manufacturers including Honda Motor Co., Toyota Motor Corp. and Fiat Chrysler Automobiles NV. With the new recalls, up to 69 million inflators will be recalled. Seventeen manufacturers are now covered, including Tesla Motors Inc., Jaguar Land Rover Automotive Plc and Fisker Automotive Inc.
At least 10 deaths have been linked to the devices. Two additional fatalities in Malaysia may be related to Takata air-bag explosions, Rosekind said.

The expanded recalls will take place in five phases between now and the end of 2019 and will be based on prioritization of risk, which is determined by age and exposure to humidity and temperatures, Rosekind said. Car owners can check to see if their vehicle is affected at www.safercar.gov.
Takata said it wasn’t aware of any ruptures involving the newly recalled population of air bags. The Tokyo-based company agreed to act on NHTSA’s request because of “shared interest towards future safety and restoring public confidence,” it said in an e-mailed statement.

“This agreement with NHTSA is consistent with our desire to work with regulators and our automaker customers to develop long-term, orderly solutions to these important safety issues,” Shigehisa Takada, Takata’s chairman and chief executive officer, said. “We will continue to dedicate significant resources to maximize recall completion rates.”

Takata said it’s in close consultation with NHTSA “regarding the severe challenges it will face in supplying replacement parts for the expanded recalls.”
NHTSA believes the Takata air-bag issue is an industrywide responsibility, and it will rely on other air-bag suppliers and the automakers themselves to address parts supply and ensure the faulty inflators are replaced as soon as possible, Rosekind said.
In February, researchers hired by a coalition of automakers found that moisture was a key factor in the air-bag ruptures that can spray shrapnel toward drivers and front-seat passengers in the affected cars. Cars with a particular Takata air-bag design susceptible to water intrusion and with prolonged exposure to a high-humidity climate are also at the highest risk, the panel found.
NHTSA largely ratified those conclusions Wednesday as the official root cause of the air-bag failures.

Rosekind said Takata’s cooperation in the investigation suggests the company has “turned a corner” toward implementing a new safety culture. With the prior recalls, the move means a substantial number of cars on the road are in need of having their air bags repaired.
“We are not satisfied with the recall rate,” he said. NHTSA will be working with automakers to get more of the cars fixed and take its own steps, he said.
The crisis has wiped out 75 percent of Takata’s value in the past year, according to data compiled by Bloomberg.
Takata raised provisions for the recall earlier this week. The auto parts supplier will book a combined 20.1 billion yen ($188 million) in charges, 16.6 billion of which was decided after reviewing air-bag recall costs, according to a statement on Monday. The remaining 3.5 billion yen charge is related to settlements with consumers injured by the devices.

Takata plunged by the most in a month on Monday after the Nikkei newspaper reported that U.S. regulators planned to expand the recall. The shares fell 9.2 percent to 373 yen at the close in Tokyo, dropping its market capitalization to about 31 billion yen.
“This is just another step in the long decline of Takata,” said Jochen Siebert, managing director of JSC (Shanghai) Automotive Consulting Co., said before the announcement was made official. “I just can’t see how Takata can survive this disaster.”
An expanded safety campaign will deal a further blow to Takada, who has so far failed to contain a spiraling crisis. Last May, the air-bag supplier set the record for the largest automotive recall in U.S. history by agreeing to almost double the number of vehicles called back to about 34 million worldwide.
In the U.S., NHTSA has told automakers that recalls will widen to all vehicles with air bags lacking a moisture-absorbing desiccant that keeps the devices from deteriorating, the Nikkei reported Saturday, citing unidentified sources. There are more than 100 million such vehicles worldwide, the newspaper said.
NHTSA has zeroed in on the role that moisture plays in making the Takata air bags unstable. The agency has said there’s no evidence that air bags that have a desiccant are defective.

Two U.S. senators said even the expanded recall may not be enough. Democratic Senators Richard Blumenthal, of Connecticut, and Edward Markey, of Massachusetts, called for all devices using ammonium nitrate to be replaced.
“Repeated stopgap partial steps, like today’s, will only continue to put drivers, their passengers, and even others on the road at urgent risk,” the senators said in a joint statement. “Until all Takata air bags are replaced with truly reliable protective products that don’t use ammonium nitrate and have proven that they pass most stringent quality assurance testing standards, Takata’s spiraling record of fatal tragedy will continue.”
Rosekind said there have been no reported ruptures of inflators with the chemical desiccant and a measured recall based on current data is a better course.
“There could be further expansion,” he said. “The science clearly shows that these inflators become unsafe over time, faster when exposed to humidity and variations of temperature.”