Johnson qualifies for NHRA's Countdown to the Championship

Posted on September 6, 2018 by CCAR in Uncategorized 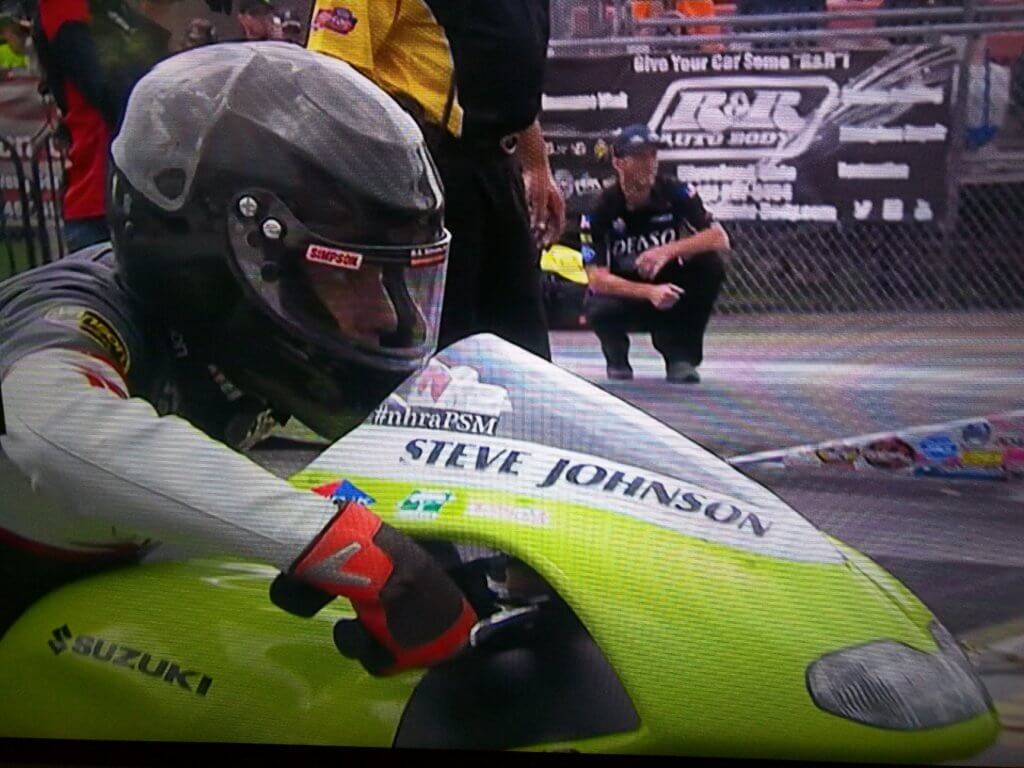 BIRMINGHAM, AL. 9/6/18 – Two-time NHRA U.S. Nationals Pro Stock Motorcycle winner Steve Johnson of Birmingham, Alabama didn’t win this year’s biggest race, which concluded a few short days ago last Monday-Labor day.  But he may have accomplished something even more meaningful – racing into the semifinals and earning enough points to qualify for the NHRA Mello Yello Countdown to 1.  Over the course of the next six races Johnson’s team will have an opportunity to win their first NHRA championship.
“We’re trying to take it all in,” Johnson said on Thursday from his Birmingham race shop.  “I’ve been racing on the NHRA circuit for more than 25 years, and thought I’d experienced it all, but this past weekend was something else entirely.
“From the racing perspective I thought our single-bike team (the only one in the top ten) performed really well against all the multi-bike teams.  We had a small problem that ultimately cost us the race, which was a major disappointment, but overall it was a heck of a weekend for us.”
After qualifying 9th Johnson made it to the semifinal round, his strongest performance of the season.
When the U.S. Nationals began Johnson was in 12th place in the standings, 19 points out of tenth place.  Only the Top 10 point’s earners are eligible for the Mello Yello championship as the Countdown to 1’s final six races begin.  Johnson has previously qualified for the Countdown (drag racing’s version of the playoffs) four times, with his best finish under this format being a fifth in 2014.  Under the previous system Johnson’s best finish was a third in 1995.
Johnsons’ Suzuki, with backing from Slick 50, Tull Plumbing, MacRak, CCAR, and Alpha Graphics, has a best elapsed time and speed of 6.863 at 195.85 in a quarter mile for the season, but he understands a very steep climb stands in front of him.  “I have never liked the term ‘underdog,’ but it really applies to us this year,” he said.  “They kid Ervin “Jock” Allen (Chief Technician) and I about having the smallest trailer in the pits, but I think our “never-give-up fight is bigger than anyone’s tractor trailer.   To be totally honest, I’m cherishing this Countdown to 1 opportunity.  A Mello Yello Championship is what drives Jock and I right now. As a huge fan, I remember my first trips to professional NHRA drag racing.  I would sneak down to the starting line and videotaped Terry Vance (our Dale Earnhardt) and all the motorcycle riders doing their burn outs, leaving the line, and even their interviews. Then I would replay the tape and dream about racing, having a pro stocker, a trailer and doing an interview with a Wally (trophy) and the championship ring. I didn’t have a cell phone back then but watching the tape forward and back a zillon times and doing my own interview was my reality and fun. In a way, that was my cell phone and “app” back in those days.
“Just being part of the Countdown means that we have a chance at winning the title.  I can hardly wait to get started.”
The six-race Countdown to 1 championship chase begins with the Dodge NHRA Nationals at Maple Grove Raceway in Mohnton, PA on the weekend of September 13-16, and Johnson thinks his team has an excellent chance.  “We may not have the best of everything, but I can promise you we are going to make the best out of everything we do have.”