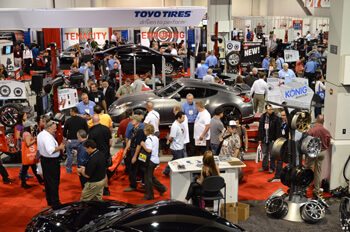 The Tire Industry Association (TIA) held a press conference in the Global Tire Expo area of the 2012 SEMA Show to highlight the current focus, goals and direction of the 90-year-old association that represents all segments of the national and international tire industry.
Here is a breakdown of the announcements.

New TIA President Outlines Goals
New TIA President Randy Groh accepted the position as head of TIA during the association’s annual meeting the afternoon prior to the opening day of the 2012 SEMA Show. During his speech to TIA members, Groh emphasized that TIA’s efforts over the next year will concentrate on two important aspects of the tire industry—successful government affairs and effective training programs for tire technicians.
“I have seen just how important it is to have strong advocates protecting and promoting this industry,” Groh stated during the annual meeting. “The work that TIA does in government affairs needs everyone’s support and attention, so that the bills that could have a damaging effect on businesses will not go unchallenged.”
For training, Groh stated the importance for TIA to remain the center for training programs. “Automotive tires are highly engineered products that demand and require proper care during both mounting and use,” he said. “Every tire dealer should have their entire staff of technicians trained to ensure that their customers are getting the safest possible service.”
TIA Tagline Changed to “Tire Safety Starts Here”
In addition to explaining TIA’s goals for 2012–2013, Groh also announced during the press conference that TIA has changed its tagline to “Tire Safety Starts Here.” The change is in line with the association’s efforts to to educate the general public about how to properly maintain tires.
“TIA felt its was important to educate the public about the critical aspects of properly maintaining the most important component of motor vehicles—tires,” said Groh. “It is important to begin a comprehensive campaign to educate the public about maintaining their tires. The tagline will work on repeating the importance of safety with a series of sub-taglines consisting of ‘Tire Safety Starts With Proper Tires Repair,’ ‘Tire Safety Starts With TPMS,’ ‘Tire Safety Starts With Inflation,’ and ‘Tire Safety Starts With Rotation.”‘

TIA Consumer Education Program for 2013
TIA announced its plans to develop an ongoing consumer education program beginning in 2013. TIA will launch a three- to five-minute video each quarter that supports the association’s new tagline, “Tire Safety Starts Here.” The videos, which will be available through the TIA website, will be accessible at no charge to consumers and retailers.
“These short videos will be focused on specific subjects that have a direct impact on tire safety for motorists,” stated Groh. “We are encouraging consumers and retailers to download and distribute the information to promote the concepts of safe tire service and operation.”
TIA plans to release the first video, “Tire Safety Starts With Proper Tire Repair,” in early 2013.
16-City Certified ATS Training Tour for 2013
TIA will conduct its Automotive Tire Service Training Tour for 2013, and the four-day ATS Certified Instructor Course will visit 166 cities across the United States, with classes being held at community and technical colleges near the main metropolitan areas. The program provides in-depth and comprehensive instruction on the recommended procedures for servicing modern automobiles and light trucks. Designed for the professional passenger- and light-truck tire technician, subjects range from the relationship between torque and clamping force to the increasingly important TPMS relearn procedures on domestic and import vehicles.
The tentative locations and dates outlined by TIA are:

TIA Passes Resolutions for 2013
TIA also announced that it has unanimously passed two resolutions that will both support the repeal of the estate tax and express complete opposition of a proposed credit card settlement. TIA says that in nationwide polls, small-business owners have expressed a deep concern regarding the death tax, and named it their primary legislative concern. TIA recognizes that many small businesses have non-liquid assets, such as land, buildings and equipment. This tax has an overwhelmingly harmful effect upon a small business.
Protecting family businesses from the estate tax is important to keeping small businesses operating for future generations, and to that end, TIA has resolved to support all federal legislation that will repeal the estate tax. TIA also said, if necessary, it will support legislation that will extend the current law of a 35% top rate and a $5 million exemption.
The second resolution focuses on the hardships that small businesses face in regards to credit card fees. These fees are the third-largest expense on a business, after labor and rent. Moreover, these interchange have tripled, according to TIA, since 2011, and have cost retailers and consumers approximately $48 million.
To combat the rising costs, more than 40 lawsuits have been combined in a class-action suit, suing VISA and MasterCard and their issuing banks. The Merchant Payment Coalition has been formed to seek a more transparent credit card system, which will better serve retailers and consumers alike.
More information about the Tire Industry Association is available online at www.tireindustry.org.
This article originally appeared on the SEMA website. Read the original article here.