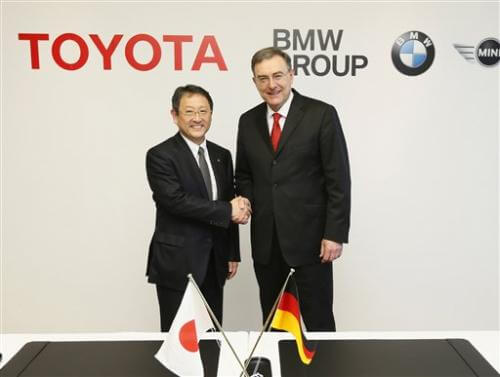 We’re well aware Toyota and BMW are pretty good pals, but details of their ongoing study sessions on green vehicle tech have been vague thus far. The trickle of information continues, and today the companies met to autograph more bits of paper and clasp hands for the camera. New binding agreements were signed to reaffirm deals inked in March and June last year, and their research into next-generation lithium-ion batteries has been expanded to cover the lithium-air kind (hopefully, they are less flammable). Work on making vehicles lighter continues, and they expect to complete development of an inclusive fuel cell system by the distant target of 2020. Expect to see some fruits of BMW and Toyota’s labor before then, though, as they intend to “define a joint platform concept for a mid-sized sports vehicle” by the end of the year. Don’t get too excited — we imagine that jargon means we’ll be privy to a few bits of artwork and some inspirational words come the deadline. If you’d like to know more about the evolving partnership, check out the source links below.